The End of the Wheel of Time

“The Wheel of Time turns, and Ages come and pass, leaving memories that become legend. Legend fades to myth, and even myth is long forgotten when the Age that gave it birth comes 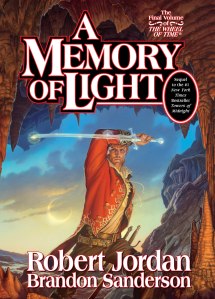 Today marks the end of the Wheel of Time series as book 14 A Memory of Light  is released.  This is a long anticipated ending.  An ending that has been 22 years in the making…

“There are neither beginnings or endings to the turning of the Wheel of Time. But it was a beginning.”

Maybe this is not the ending of the Wheel of Time.  Maybe it is just an ending.  Still, as I grip the thick hardback in my hands, I can’t help but feel sad that I will never pre-order “the next book” again.  One of the things I have loved most about this epic fantasy series is that the characters have grown so much, and so many people have grown along with them.  I was introduced to the books by my husband and have already read the series through several times.  I can’t help but feel sadness when he recalls reading the first book, The Eye of the World in 1990.  I have to admit that I wasn’t quite old enough for this epic fantasy in 1990.

I remember the news of Robert Jordan’s death in 2007.  I remember thinking that we will never know the end.

So, thank you.  Now, I’m off to read and no one talk to me until I’m finished.  Book review to come…

← Becoming a Habitual Writer: My New Year’s Resolution
The Value of a Writers Group →